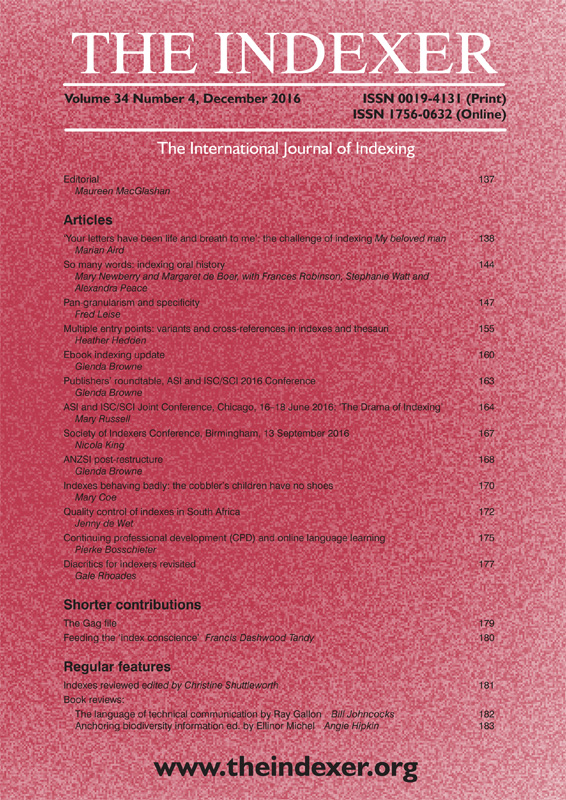 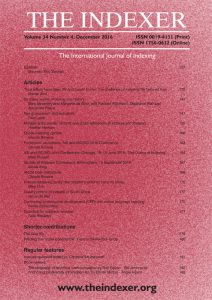 Every three months, a treasure lands in my mailbox. As I pull it out of the clear plastic envelope, and read the article titles laid out on the smooth pastel cover, I feel again how lucky I am to be a member of the indexing community.

As usual, The Indexer I am holding is full of smart—and sometimes humourous—information, advice, and stories on all things indexing.

How is it that they never run out of ideas?

Editor Maureen MacGlashan wrote about that in 2008 in an article titled “The Indexer: past, present, and future” for the occasion of The Indexer’s 50th anniversary. In the article Maureen says that in the early years, “Those who knew no better (and, from my own experience as editor, still know) saw no future for a journal dedicating to indexing…Editors were warned: ‘You’ll never be able to keep it up; you’ll find that by the end of another year you have completely exhausted all the possible aspects of indexing.’”

Maureen then explains why that did not happen, and why it wasn’t going to be a problem, at least not in 2008.

That was ten years ago. Would Maureen say the same today?

Well, get ready to ask her at our opening session at the ISC/SCI conference.

We’re thrilled to announce that Maureen is going to give us the lowdown on her years as editor of The Indexer, in an interview with Christine Jacobson. The conference is in Winnipeg June 8-9.