The ISC/SCI Ewart-Daveluy Award, inaugurated in 2015, is presented each year to an individual who has created an index that demonstrates outstanding expertise through a combination of skills.

The 2021 Ewart-Daveluy Indexing award was presented to Stephen Ullstrom for his indexing of The Shield of Psalmic Prayer: Reflections on Translating, Interpreting, and Praying the Psalter, by Donald Sheehan, published in 2020 by Ancient Faith Publishing.

The Shield of Psalmic Prayer is a collection of essays, study notes, and personal journal entries on interpreting, translating, and praying with the Psalms in light of Orthodox Christian theology. The author, Donald Sheehan, was an English professor and long-time director of the Robert Frost Place in New Hampshire. The collection was gathered and edited posthumously by Donald’s widow, Xenia Sheehan. Because the text originally was not intended for publication, the pieces are often unfinished and unpolished, which gives the book a contemplative and quiet tone. About two-thirds of the chapters focus exclusively on a specific psalm or two. Stephen’s challenge was to understand these fragments and tie them to the broader themes of the book.

Stephen met the challenge of creating an excellent index. As one judge noted, “really nice detail and solid breakdowns under the Psalms.” Said another, “this is a properly done scripture index.” Other comments included “a good solid job on a difficult subject” and a “thorough, thoughtful index.” Finally, “it addresses the main needs of potential users.”

The index is available courtesy of Ancient Faith Publishing.

Stephen Ullstrom is a freelance indexer and writer residing in Edmonton, Alberta. He wrote his first index ten years ago, never imagining that that would lead to a full-time indexing career. In 2014 he won the Purple Pen Award for best new indexer. Stephen indexes in the humanities and social sciences with a special interest in Asian studies, religious studies, history, and biography.

In the award’s fifth year (in a year unlike any other), we are thrilled to note that the outstanding quality of submissions allowed two awards to be presented.

Carla DeSantis was presented with a Ewart-Daveluy Award for her index to Heather Bamford’s Cultures of the Fragment: Uses of the Iberian Manuscript, 1100–1600, published by University of Toronto Press.

One of the challenges to indexing this book was to correctly identify the array of proper names, titles, and terms spanning a huge range of languages. Carla’s index accomplishes this. In addition, the major themes are well analysed with consistent and informative sub-entries and entries for a considerable and useful gathering of scattered discussions. Of note is that this is only Carla’s second index!

View an excerpt from the index, courtesy of University of Toronto Press.

Anna Olivier was presented with a Ewart-Daveluy Award for her indexes to Les générations des Soufis: Tabaqat al-sufiyya de Abu Abd al-Rahman, Muhammad b. Husayn al-Sulamī, translated and presented by Jean-Jacques Thibon, and published by Brill.

The complex text is analysed and indexed in creative ways. Anna’s indexes were found to be valuable tools for various scholars, including those doing research in the Science of Hadith, and equally useful to linguists, literary critics, and specialists.

Audrey McClellan was presented with the Ewart-Daveluy Award for Indexing Excellence at the awards banquet of the Indexing Society of Canada in Winnipeg on June 9, 2018, for her index to Barry Gough’s Churchill and Fisher: Titans at the Admiralty, published by Seaforth Publishing.

As its title suggests, the book focuses on the relationship between Winston Churchill, as First Lord of the Admiralty, and John Fisher, as First Sea Lord of the British Royal Navy, but also covers the evolution of the British Navy during the late 19th and early 20th centuries and the relevant events of the First World War.

The indexing challenge was to compress 585 pages of what often felt like three books in one into a 13-page index accompanied by a short Index of Ships. Audrey rose to this challenge, achieving a thorough and comprehensive coverage of all relevant topics and personal names, along with the interrelationships between and among topics and names within the space constraints.

An excerpt from the index is available here, courtesy of Seaforth Publishing. 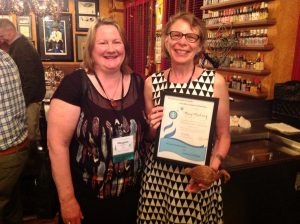 Answers to your questions about hiring and working with an indexer